As spring creeps into the air and the snow banks turn the ugly brown and the first shoots of green pop through the soil we start to think about the traditional foods of the season. One meat that comes to mind is lamb. Lamb has traditionally been a meat used to celebrate religious and seasonal happenings. Roast leg of lamb is often the choice for many Easter feasts. It also can be part of the Passover dinner. It can symbolize the "re-birth" of the earth and the passing of the winter season. So why lamb and what is "spring" lamb? In the days of early sheep farming in northern temperate climates lamb were often born in the spring which would make it very young to eat at this time of year. The term spring lamb can mean the lamb that was born in spring and raised throughout the summer into early fall. So spring lamb really wouldn't be ready until mid-July into September. It would be actaully the best lamb in that it would have eaten first mother's milk and then the best pasture throughout the summer months. A Spring lamb traditionally would be around 6 months old, weigh about 30 -40 lbs and would not have reached its full size yet. Today most lamb produced are just over six months but are weighing about 70lbs. This is due to larger breeds being grown and feeding methods. In reality almost all the large commercial lamb we buy is "spring" lamb and the calendar is no longer a factor as much when considering lamb quality. Niche market, grass-fed product can still be effected by season and end of summer product is typically the best.
So why lamb in spring? Originally the "Spring" lamb was meat from the English Dorsett breed that would give birth in the fall, feed its offspring on milk throughout the winter and then on the first early grass of spring. http://www.edibleportland.com/2008/03/edible_seasonal_6.html so spring lamb is really fall lamb. Lamb imported from New Zealand, Australia and Argentina , which have opposite growing seasons are often sold as "spring" lamb and their breeds tend to be a little smaller which adds to the size issue.
Lamb remains a favorite this time of year with many menus serving a roast. This will often increase the wholesale price for the legs and racks, leaving the extra shoulders to be sold off at a more reasonable price. These can be boned and roasted as well with a little more skill. I like to stuff them and roast it slow for about 2.5 hours.
Posted by Chef Schneller at 2:53 PM 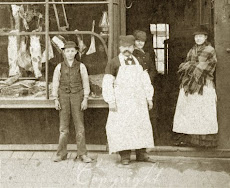